There are so many new openings in Manchester at the moment that my wallet and my waistline can’t keep up! We head into town once or twice a month and first spotted Sakana Pan Asian back in November when we were at The Albert Hall for gigs. We had no idea that we’d find a game changing salad on this little patch of Peter Street, but more of that later… 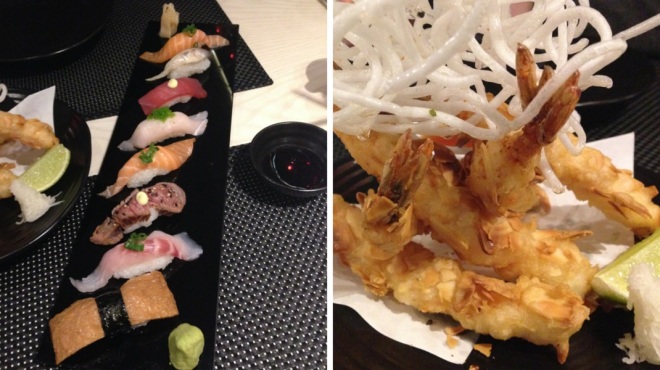 The premise is pan-Asian, and we were advised to order as you do tapas – three or four dishes each. We started with a beautifully presented nigiri selection. As well as the usual seafood the two standout pieces were a seared beef fillet (it was perfectly pink and hubby tells me it was bursting with flavour) and a marinated tofu. I’ve never had the tofu before but it was sweet and tender and I could’ve eaten a plate of them. Bonus points to whoever makes the pickled ginger. It was fresh and sharp and miles away from anything I’ve had our of a jar.

I’d been full of a cold for days so when we ordered drinks on arrival I was looking for something non alcoholic. Our server kindly offered to get me a mocktail made up. My husband wanted an IPA but both were out of stock – so he stumped for a Japanese beer instead. There’s also an immense cocktail list and plenty of wines by the glass.

A pile of prawn and flaked almond tempura came topped with crunchy noodles. The tempura was spot on: juicy, just cooked prawns and not a hint of grease on the batter. The almonds were in the batter, not something I’ve seen before, so gave it an extra bit of crunch.

I’ve only recently tried Hirata steamed buns, and loved them, so we ordered two sorts for variety. They came as a DIY job your built yourself which was quite nice as it meant they didn’t go soggy sat on the plate. Each serving had two large buns keeping warm in the steamer, with a platter of filling on the side.  Pork belly came with thin sliced apple for crunch and miso-yaki sauce. You know a sauce is good when you want to stick your finger in the bowl and finish every last drop! The aubergine tempura version comes with kimchi and a sesame sauce.  However, they both needed something else adding to them and that’s when we discovered (cue dramatic music) the green salad from heaven!

A green side salad was ordered because of my stupid cold, and we expected nothing more than the usual tiny bowl of iceberg or limp leaves from a bag. What we actually got was a generous bowl of micro greens and herbs with nuts and a refreshing light dressing. It was so bloody good that we fought over the last few bits, and even now, two weeks on, it comes up in conversation!

The one disappointment in the meal was the soft shell crab and mango uramaki rolls. Our local Japanese restaurant serves soft shell crab rolls which are stuffed so generously as to make them ridiculous value. Here there was so little crab (except in that end one on the photo) that they really weren’t worth the wait. 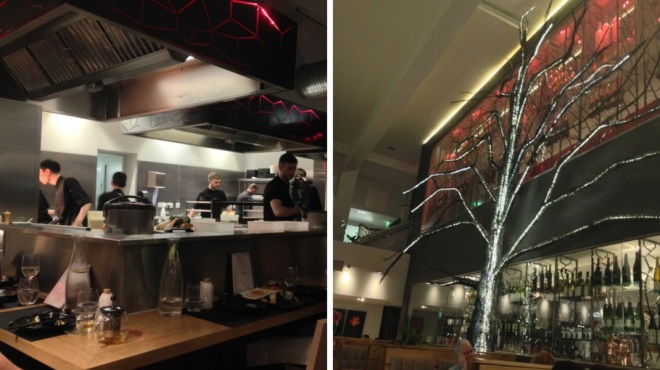 The restaurant itself is big and I was worried it was going to be one of those places where people go ‘to be seen’. However there was a real mix of people in there and they were all obviously there for the food. Seating ranged from cosy booths to bar seating by the open kitchen where you can sit and watch your sushi being made. Staff were welcoming and helpful – they were happy to explain dishes and keep us up to date when those crab rolls went AWOL for a while. The loos were a bit dark though – I couldn’t see my windswept face in the mirror to check how far my mascara had run in the rain! By the time we were leaving the bar at the front was heaving.

The food, both quality and selection, drinks (I must go back now I am well and try some cocktails!), presentation and atmosphere add up to somewhere that we’ll definitely go back to again. And the salad- we’ll order a bowl each next time!

Thanks to Red Russian PR for the invite.Disclaimer: our food was paid for by the restaurant, our drinks by us. All opinions are my own.

She eats. She drinks. She cooks. She travels. She learns. She tastes. She bakes. A foodie with exceptional taste! Always looking for the best food and drink producers from far and wide. Chocolate brownie queen. Judge: International Cheese Awards. Cheese fiend! Travel lover. What better way to discover new food, than to travel to it. Massive fan of The Archers. Crazy cat lady and proud. NW England / Manchester / UK Twitter & Insta: She_Eats_Blog Facebook: SheEatsBlog

Roast a squash at lunchtime, pan fry some gnocchi

🥨🥨Yesssss!🥨🥨 I made pretzels and they

🍏🍏My favourite jam🍏🍏 Every year @sally

Am in full autumnal mode after a short brain and b

Hi all - do you know that I have an Instagram page? www.instagram.com/she_eats_blog/

The reason I mention this is because today I have posted my last blog post. From now on I will be sharing recipes to Instagram, along with my usual cat/cake/cheese content so please do pop over and give me a like.

The post is below. Thank you so much for reading it over the years and for baking my recipes and generally indulging my greediness.

It's goodbye for now, but you never know what the future brings!

As such, I will be closing this FB page in a couple of days - which is why I want to point you to Insta so we can carry on talking about runny cheese and cake fails!

*disclaimer - this pic is several years old. I can only dream of hair this tidy right now 🤣🤣 ... See MoreSee Less